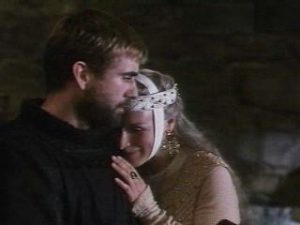 You know the cliché question: what one person in history would you most like to have a long talk with?

I always say, “Shakespeare, without a doubt.” That’s because I’d like to ask him if he ever dreamed his plays would still be performed to sold out crowds 400 years after he wrote them. “Writer to writer, Bill,” I’d say, “how the f—did you do it?”

But I wouldn’t wish to have lived in his time, for several reasons, including the questionable hygiene; (though Queen Elizabeth did have the first flush toilet, she had head lice and put lead based make-up on her face).

Anyway, having been born in 1952, I got to see Laurence Olivier play a haunted and brooding Hamlet and Kenneth Branagh play a truly beguiling Iago. And Zeffirelli’s Hamlet is stunning. I think Shakespeare himself would have approved of the cuts and cinematic wonders; he might have wondered why Mel Gibson’s Hamlet looked the same age as his mother played by Glenn Close. But then again, at least Queen Gertrude was played by a real woman.

Showing this version of Hamlet to my freshman English students is one of the things I dearly miss about being retired.

I taught English at a community college for over 27 years. I thought that I would never retire, that I would die on the job, maybe having a fatal stroke when yet again an entire class had failed to do the reading assignment.

Instead, I decided it was time to call it quits on a full-time schedule of students who increasingly read text messages instead of textbooks. The technological solution sold to teachers as a remedy turns out to be an insidious marketing ploy for the corporations who profit from this snake oil. Students who don’t read assignments in books also don’t read assignments on “Blackboard” or in any other form on their electronic devices.

But if they’re in class, and I manage to keep them from indulging in their addiction to their iPhones, they will watch. And if I can make Shakespeare’s genius connect to their experience, the wheels start turning and they write some pretty interesting and thoughtful essays.

Before I show Hamlet, I ask, “Do you know anyone whose mother re-married and expected her children to accept the new man as their father? Do you know anyone who hated his step-father and resented his mother for not getting how miserable he was?” A lot of students will then give examples of just such a scenario. “Isn’t it a betrayal for the mother to care more about hooking up with some new man than she does about her children?” I ask, and a heated discussion starts about such heartbreaking situations, including women who actually killed their children in order to secure their new man’s affection. They are very familiar with La Llorona, the mythic ditch witch of New Mexico, who did just that.

Then I say, “Well, that’s a key part of Hamlet, and it even gets a little weird between Hamlet and his mother.” Blank expressions ensue.

I tell my students not to worry if they don’t understand 90% of what’s being said; they’ll get the idea well enough from what they can understand and what they see. But I do give out the speech Hamlet makes about losing all his mirth and say, “This is basically a description of depression. So these themes, unlike the language, are still part of our world.” They can then write a paper comparing their experience of depression with Hamlet’s feelings that the world sucks.

I don’t know where or when these students will touch the magic of art and literature and their ability to speak powerfully about the human condition after leaving the clutches of teachers of required English classes like myself. Many of our students are looking for jobs in healthcare or engineering, not understanding that thinking about the human condition will help them excel in these fields. I like to know that I at least offered them the chance to taste the universal themes that deepen our experiences and connections with each other.

I’ve retired from full time teaching, but I have a feeling I’m going to pick up a class or two as a part-timer in the near future. And I won’t be asking for a topics course on Shakespeare or a creative writing course for students who read Kerouac. I’ll ask for a freshman English course with many students who are the first in their family to go to college, and many who have no visible interest in literature or history. I want to continue prompting essays on heroism using lessons on Nelson Mandela or the Nobel Prize winner Malala – who was shot in the head because some people didn’t think girls should get an education. Presenting an example of a girl who put her life on the line in order to read her assignments is definitely thought provoking to students who consider school to be a boring chore.

Learning can be a radical act of going beyond limitations set by one’s culture and socio-economic conditions. As a teacher, I want to serve this process. I want to share my awe for heroes like Malala, Nelson Mandela, and yes, Shakepeare. I’m not done yet.