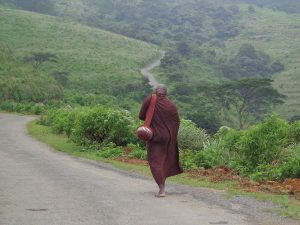 Let’s see – I was a radical hippie chick. That’s definitely over. I was a mother; well, I will always be that in spirit but not in body. My son is no longer in the realm of labels and identities.

Here’s one label that hung on for a long time: I’m a Buddhist, yeah, that’s it – a Buddhist.

What these labels mainly give us is a connection to others. So maybe instead of saying I’m this or that, I could say, I’m connected to the world as a radical hippie chick, a mother, a teacher, a writer, a Buddhist…whatever. What we humans really want and need is connection to others in this hardship world. That’s why Facebook and Twitter and other social media have caught on like free booze for drunks.We can pretend to be somebody that we construct with carefully chosen words and pictures with others doing the same thing.

But when the identity is not genuine, has expired or has a false premise, the connection it makes eventually feels hollow, and very disappointing.

As a Buddhist I’ve hunted with various packs. I wore the costumes, recited the sutras,responded to bells, bowed to the alpha dogs. I wanted to belong and could not deny the fundamental psychological truth of the dharma. The religious aspects of institutionalized Buddhism always made me growl, but I went along with it as “mindfulness” practice.

But I just couldn’t bring myself around to the notion that sexual abuse perpetrated by various “masters” was some kind of profound teaching. And then there are the stories of women seducing teachers, attempting to have an intimate connection with the alpha male and maybe even get “dharma transmission” between the sheets.

“Dharma transmission” is one of many Buddhist concepts that have become empty of any spiritual meaning. It is primarily used to afford someone the right to make a living as a teacher, to pose as an awakened or awakening mentor on the righteous path to enlightenment. The main criterion seems to be the ability to sit in the meditative posture without moving for long periods of time. Chosen students need to at least look the part.

I know of one case of a married woman, with children, sleeping with a roshi who promised to give her “dharma transmission.” He broke his promise when he found out she was also having sex with another student.

Because in my opinion, Buddhist teachings are based on clear psychological insights, the bare truths about being human. As with all great insights, greedy people have corrupted them to give them the lifestyle and control over others that they want, or at least to tell themselves the stories that keep unwanted reality at bay.

And then there’s the reality of my own corrupted self.

If I were to follow the Buddhist path as I genuinely see it, I would be a nun, one of those who don’t touch money, who don’t kill mosquitos, and who only eat what others give them in their begging bowls. If I have any faith in Buddhism as an “ism,” it’s that such nuns and monks are doing the real work and getting the real benefit of letting go of attachments. It’s been my direct and relentless experience that my attachments, my selfish and desperate needs and wants, are indeed what cause me and those around me to suffer.

But I’m not going to shave my head and live in a kuti with mosquitos and a begging bowl. I’m probably not even going to spend more than a week on intensive meditation practice. I am too afraid.

It’s so hard not to be able to tell ourselves that we are something, especially when that something sounds so cool, so transcendent.

So I go back to the original point of calling myself anything, the human need to feel connected to the world. The irony is that whether I feel it or not, of course I’m connected; nothing that exists is not connected to existence.

But humans have been playing disconnection mind games with each other forever, threatening to ostracize and isolate the “bad” or “unworthy” members of the community. Even families use such threats on their members. Banishment, excommunication, or disinheritance is a heavy punishment and the dread of it coerces people into a lot of destructive behaviors: lying, buying things, getting plastic surgery, joining cults, hating foreigners, and on and on.

This intense and innate desire to be connected is one reason why aging is so dreaded. Being ill or otherwise physically unable to join in activities, not being able to hear well – these things can make one feel left out, isolated. Hence, churches seem to have a lot of elderly participants, in part because religious institutions claim to include everyone who abides by and believes in the dogma.

Wanting relief for loneliness is a huge reason to join any group, and that makes sense. But when the dogma seems like  bullshit, based on lies,one can face a choice of being alone or being disingenuous: betraying the group or betraying yourself.

C.S. Lewis wrote a brilliant essay entitled “The Inner Ring” in 1944 in which he gave advice about genuine connection. I often remind myself of the two main points he made:

“If in your working hours you make the work your end, you will presently find yourself all unawares inside the only circle in your profession that really matters. You will be one of the sound craftsmen, and other sound craftsmen will know it….”

“And if in your spare time you consort simply with the people you like, you will again find that you have come unawares to a real inside….This is friendship. Aristotle placed it among the virtues. It causes perhaps half of all the happiness in the world….”

That’s it. That’s what being somebody, as opposed to some thing,  really comes down to:

-be a good friend.