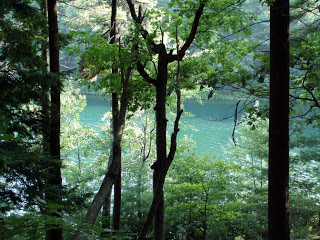 When I was maybe three years old, I wanted to write. I didn’t yet know what being a writer meant. I just wanted to take a pen or pencil and say things with it that other people could read.

I remember trying to copy the shapes of words and letters off of my father’s can of shaving cream. I remember making wavy squiggles with a pen and asking the lady next door to tell me what they said. “Water, water, water,” was her reply. And yes, I remember scrawling my name, in lurid crayon colors, on all my big sister’s books. (She did not find that particularly profound or cute.)

To me, writing is as powerful as it was for the druids. Despite any New Age or King Arthur legendary stuff about shape changing and crystals, the real magic of the Celtic druids was their ability to write. This gave them the power to do amazing things, such as keep records of someone’s property and put down for posterity the shenanigans of some chieftain, thus ruining his reputation.  The fact that one druid on the east coast of Ireland could make marks that another druid on the west coast of Ireland could read and understand was truly magic. And it still is.

Philosophical treatises, mathematical theorems, wills, census records, stories, letters, poems – everything written down has the power to go through time and space to connect people’s minds.

My first success as a writer came in fourth grade. I wrote the class Christmas poem, which was about a snow fairy. It “borrowed” a lot from Longfellow and “The Night Before Christmas,” as I recall.  By fifth grade I was onto more adult stuff, writing a story about a sleek and beautiful black-haired woman standing on the stone balcony of some mansion, caught between the raging sea below and a handsome man in a tuxedo pouring champagne in the room behind her. Deciding between the two, she threw herself into the sea. Ahhh – what prophecy! But that’s another story for another day.

To have a passion for writing is different from having a passion to make a living as a writer – very different. It’s a good thing I didn’t develop the latter, since I couldn’t make a living on what I earn as a writer. Anyway, I love my paying job as a teacher. And so I’ve been able to shamelessly write what I am compelled to and passionate about. Some of it isn’t good. But I’m still glad that I wrote it.  I always try to learn something from the process of writing, and I do, even if it’s learning what constitutes bad writing.

Mostly what I want to learn is what is noble. That seems like an old-fashioned word now, something with the scent of class and snootiness.  But I use the word “noble” to describe someone who has integrity and tries to act, even live, according to it – no matter what.

Teaching and traveling and hanging with friends, in these things I have to put my actions where my writing is, and I don’t always come through in a noble way. So without these worlds outside of writing, I wouldn’t have much to say and might get fooled by my own bullshit.

Every now and then, I get a crippling sinus headache that not much can be done about other than starting a regiment using items from Walgreen’s larder and lying in bed. These headaches are less frequent now, but when one hits, I’m doomed to about 24 hours of non-action.

During the last bout of pain I listened in the dark of my room to a wonderful reading of Henry David Thoreau’s Walden. Thanks to my friend Catharine, who lives near Walden Pond, I’ve swum in its waters, stood on the site where Thoreau noted the sounds and sights and thoughts the rest of us could experience through his work long after he died. He wrote, “I went to the woods because I wished to live deliberately, to front only the essential facts of life, and see if I could not learn what it had to teach, and not, when I came to die, discover that I had not lived.”

I wish for all of us to dive fully into what inspires us, whether it be painting or food or children or tennis or singing or whatever, and that we do not do it to make a living, but to live, no matter how exhausted we are from making a living.

Writing is where I live most fully.  And I’m glad I can be a demented old woman and still write, even if it’s back to “Water, water, water.”