My 60th year on planet Earth sucked. Or to put a gentler spin on it, it was challenging. I’m glad it’s over. I’m glad I’m 61 now and am done with that year.

The main theme was facing reality. Here are the key aspects of reality that I slammed my face against. And maybe someone out there can get it over with before I did. Sixty years is a long time to wait before facing reality.

Reality #1) I will keep getting older and older, and everything that I thought was cool about my appearance has already drooped, dropped off, developed a growth, had to be removed, or caused pain. All the stuff I pitied old people for going through is happening and will continue happening to me. I am not willing or wealthy enough to do some Jane Fonda “Oh, my God – she’s 70 and still sexy and young looking” thing. And then I will die.

Reality #2) The world is not what I’d hoped it would be. It is a stupid world, and technology has made its stupidity more widespread, compelling and noisy. People who truly listen are rare. Intellectualism is dying. The days of the likes of Gore Vidal and Norman Mailer being as huge a draw on “The Tonight Show” as vapid celebrities are gone; the days of films based on novels like “One Flew Over the Cuckoo’s Nest” are gone, leaving us with a third “Iron Man” movie. I am not going to be held aloft by a crowd of literate philosophers who appreciate my existential insights and teach my work in lecture halls crowded with students who ask questions like, “Could the Dark Energy of the universe actually be aspects of consciousness?” Or “Was ‘All Quiet on the Western Front’ the most powerful anti-war novel ever written and ignored?” No – there are not enough literate philosophers in America to hold aloft a large dog, and I have obviously not successfully tapped into them, wherever they are. And in most lecture halls students are staring at their own little personal screens and texting questions like “What R U doing?”

Reality #3) I cannot depend on family and friends to fuel me up with support and motivation to keep following my bliss. Nor can I depend on guys wanting to lie with my naked body to pretend that everything I do is profound and special.  I either have to charge myself or be stalled in self-pity. I could single out those who have indeed read my books and listened to my music and thank them – deeply – but then those who haven’t and don’t intend to would be more pissed off at me than they already are, and I don’t need that. Besides, I don’t have a pristine record of following up on the successes and applauding the efforts of many of my friends and relatives, though I do try when it feels like I have a genuine respect for what they’re doing – which brings me to believe that many of my friends and family must not have a genuine respect for what I’m doing, and well, that feels shitty and makes me seriously doubt myself. So I’m going on to the next item.

Reality #4) I have a tendency to betray myself and my deepest convictions. The lifestyle I honor and that makes me feel good does not include playing games on the internet, listening avidly to news stories about mayhem and idiocy that I can do nothing about, or rolling through scores of vapid motivational rhetoric and useless political rants on facebook. And yet I do all those things regularly. Meanwhile, the cello has a gray layer of dust on it and writing projects lay dormant in the dank shadows of my hard drive. At some point I saw life’s absurdity as freedom. And secretly, I still do. I’ve just been stumbling around, blind-sided by realities #1 through 3, and then this one:

Reality #5) I’m going to be permanently sad about my son’s death. I will never get over it, move on, get on with life, be soothed by the fond memories, or any of that stuff. I will be sad. Forever. Not depressed, sad. And there’s a difference. As I said, I have a pretty deep and abiding certainty — thanks to many artists, philosophers, and personal experiences — that there’s a huge freedom underlying all of this craziness. And I am most grateful that, for some reason, I have a passion for facing reality.

James Baldwin and a lot of Buddhist teachers have recommended facing reality, as opposed to bitter disbelief about corrupt and racist societies or woozy delusions about somehow finding the rainbows and unicorns hidden in old age, sickness and death.  Facing reality means you might actually get to work with it; otherwise you’re scowling, crouching in life’s musty corner, muttering about how things should be. “Psssst, hey buddy – yeah, you. Come over here so I can tell you what a piece of crap life is. No wait. Come over here. Ahh – fuck you!”

Maybe someone makes you wear the dead chicken around your neck, and then it’s not so fun anymore. That was my 60th year. But I’m 61 now. 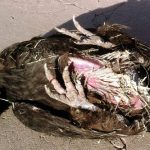