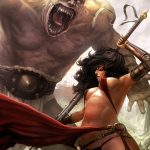 Morally weak heterosexual men have two strategies for getting laid: rape and religion.

Men who use religion to justify their control of women are delusional lunatics and/or diabolical bullshitters able to create entire cultures.

Take Joseph Smith for example. He was alone in the woods when an angel came to him and said, among other things, that polygamy was not only okay, but God recommended it. Joseph was really happy to hear that, and so were a lot of other men he told his story to. Though upstanding members of the Church of the Latter Day Saints now rebuke the idea of polygamy, there are large numbers of Mormon men who have not forsaken Joseph Smith’s original inspiration to have God-sanctioned access to as much ass as possible.

But I don’t want to just pick on the LDS.

All Abrahamic religions (Judaism, Christianity, and Islam), as well as many others, such as Hinduism, are righteously patriarchal and lend themselves to the blatant notion that women need to be controlled by men. This is a very convenient dogma for guys who, before DNA testing, hated that women were the only ones who could be absolutely certain that they were the parents of their children.

Males are hardwired to want certainty that their genetic stuff is going to thrive.

To this end, a chimpanzee basically gets buff, fights off other males and then waits for the females to bend over willingly for him. Chimpanzees don’t quote scripture to ensure their dominance.

Men who concoct religious support for satisfying their libidos don’t like the idea of leaving their success up to women. They spout righteous reasons to control women’s choices, including biblical stories about women being reckless and evil. They’re evil because they look good, forcing men to want them; plus, the whores just might have sex for their own reasons and pleasure. So, husbands, brothers and fathers need to have exclusive access to them and make sure they don’t have the freedom to go around being evil and reckless.

But not in America, right?

Good Christian men in America are now slithering out into public view — in this nation where women are doctors, lawyers and political leaders – to question a woman’s right to have access to birth control; or to mandate that women undergo vaginal penetration with ultrasound probes against their consent before they can exercise their legal choice to abort a pregnancy. And there’s no doubt that many men in the religious right end of this country want to reverse Roe v. Wade, making abortions illegal. All of this without input from women themselves.

And is it any coincidence that the urge to impede a woman’s autonomy over her own means of reproduction is manifesting publicly at a time when the number of women choosing to have children without having husbands is increasing, steadily and shamelessly?

There are seriously sick consequences to the systemic, religiously based, support of men’s desperate desire to control women’s sexuality. Here’s a partial list: female genital mutilation, stoning an allegedly adulterous woman to death, using women as property – selling and trading them, throwing acid in the faces of girls who want an education or dare to refuse a man’s proposal, marriage and fornication with 12 year old girls; and this is a list of activities that go unpunished and are in some cases openly legal.

Women are not weak. Women have a lot of power that they too often fritter away on buying shoes, checking their hair for split ends, or talking about their neuroses. Women need to realize that the assault on their reproductive autonomy could branch out to limit the number of shoes they get to buy and to a mandate to cover up their hair and get the hell out of law school.

Women who buy into the very religions that support their subjugation have sometimes been able to use scripture and Mother Mary to dance around the patriarchal premises.  But the power of women, which is badly needed in our world and clearly under attack, is greatly shackled by dogmas created by and for men who do not want women to believe in or use their strengths and wisdom.

In the 9th century the Catholic Church outlawed women being warriors. Too bad for the men they’d been fighting beside. And in subsequent centuries, strong women got branded as witches to be used as fuel for public fires.

Women were brutalized for insisting on their right to vote in the early 20th century.

But guess what? There are women who fight beside men; there are strong women whose wisdom is put to use for nations; and women have the vote, birth control and the right to choose to abort a pregnancy.

Let’s not lose ground; let’s not let religious propaganda take away one of the greatest hopes we have for a saner world: autonomous women.