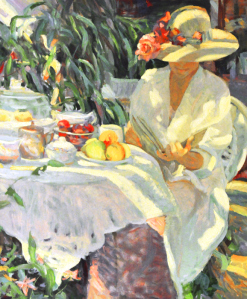 Think of the stereotype of people who are alone– the depressed woman in raggedy house slippers, t.v. on, some cats sprinkled around the room.

Or the teenager who’s too fat or too skinny or too weird and sits alone at the end of a cafeteria lunch table.

Or the paranoid man peering out of the peephole of an apartment door afraid to go out or let anyone in.

Or someone on facebook with one of those blank blue silhouettes and maybe eight friends.

It’s hard to imagine that there are people in this world who actually enjoy being alone sometimes, phone and computer off.  I’m one of them.

I’m not sure why – maybe because of some in utero mishap or lack of proper socialization – but I have always treasured, sometimes a little too desperately, my alone time. Maybe it’s because I grew up in a sweet bedroom all to myself, where I could read and dream and listen to music and pretend I was in tune with all kinds of profound stuff.

I didn’t (and don’t) want to be alone all the time. But when I’m around people for long stretches of time without any solitude, I start to feel creepy.

A few friends were golden pals throughout my girlhood. We conjured adventures together, stayed outside until dusk on summer nights, imagined treasures and elves and later true hippie love as we made gods of the Beatles and Bob Dylan. My best memories are of one on one connections and spacious moments of reflection. When I was ten years old, I saw the 1962 movie version of “Hamlet” with my friend Bitsy and her father. I watched him in the dim light of an ornate old movie theater in Richmond, Virginia, as he recited the lines along with Sir Lawrence Olivier. Mr. Perry died when I was in 7th grade; I think of him whenever I try to impart my love of “Hamlet” to my students.

In high school, I went straight from the margins of the preppy world to hot hippie chick. But my favorite times weren’t at the parties where I drank too much and flirted passionately. My favorite times were when I came home to my room, by myself, buzzed, and listened to music or lay in bed thinking about some guy.

I only lasted six weeks at Boston University with a roommate in a skyscraper full of people. Before dropping out, I often borrowed the single room of a girl across the hall, who got that room by convincing administrators that she was mentally messed up.

That must have been me – a mentally messed up person who yearned for a base of solitude.

I tried mightily to be a wife – three times.  It was not meant to be.

For years, decades, I’ve felt envy and shame around “everyone else” being able to cohabit, travel and party in large rollicking groups; to endure and ignore the constant noise of others in their space; to live nonstop for and with their families: always busy, always with projects.

Then at my friend Steve’s wedding, the Zen priest read a line from a Rilke poem: “in marriage we protect each other’s solitude.” Wow.

“…we protect each other’s solitude.” I can think of nothing more intimate and generous.

There are certain people in my life, loved ones, friends and family, who respect that notion. They are with me. I am with them. Even when we are alone.

Now the phrase, “I need my space,” isn’t a break-up line; it’s an explanation of how a relationship can work for me, and it wasn’t until I realized that and accepted the same insistent desire for autonomy in the man I live with that hope for a genuine partnership began.

Zen practice is a perfect manifestation of shared aloneness: people together in fervent isolation. We are all sitting in the same room, not speaking, sharing a private effort to get to the kind of solitude that includes everything and everyone.

I still have some envy of people steeped in a life with large and boisterous families, but I can take only so much togetherness before I have to drift away for a while.

And I don’t think I’m alone in this.