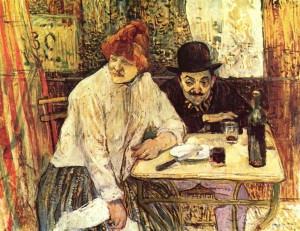 I’ve started to go to al-anon meetings again. For those of you not in the know about the 12-step world, it’s like Alcoholics Anonymous, only for the family members or companions of addicts – the enablers and such.

My father was a functioning alcoholic – well, functioning in the sense that he made a good living as a doctor, played golf at the Country Club and was an upright member of the Episcopal Church. Oh, whoops – he also sexually molested his daughters and probably some of his patients, and treated his wife like crap. He couldn’t even stay in the room with her as she was dying. He was a big baby.

Getting high relieves people from the duty of thinking clearly and developing grown-up wisdom and compassion.

My father’s drinking was an acceptable part of the white middle class world of the 1950’s and 60’s. He had two, often three stiff drinks every day after five, and after noon on Sunday when he switched from Scotch to martinis.

That’s a lot of liquor.

Nowadays the drunks I know are more into fine wines and Belgian ales. Consuming a good French Cabernet or a few pints of micro-brewed pale ale seems civilized. Chic. Cool. Even when they start to talk a little too loudly or announce to their dinner party guests that their husband can’t get it up.

When I was a drunk, starting in high school and careening through college and into grad school, I drank whatever would get me high. I drank to get drunk. I’d finish a hard week of paper writing, report giving and test taking and take a well-deserved vacation in the local bar. Playing pinball, shooting pool, flirting with men who smelled bad, downing shots of this and pitchers of that, I’d often stumble outside when it was still daylight. I thought this was normal!! And I’ve been thinking this it is normal, fun behavior to get high on a regular basis for most of my life. So even if I wasn’t doing it, I thought it was uptight and unlovable of me to want other people to stop doing it.

Boring people stay sober. Weirdos. Bland weirdos who are not with it.

Two things saved me from becoming a full-tilt alcoholic: getting pregnant and not wanting to damage my baby, and developing a horrible physical reaction to alcohol consumption – ripping headaches that come along with even the slightest buzz. But when I was drinking, promiscuity, drunk driving and other behaviors I deeply regret went right along with the alcohol.

Drunks think they’re partying or relaxing – having a good time, being cool. But when you’re drunk you’re more likely to hurt people, physically or emotionally, than you would if you were sober. I mean , DUH!

And if you find yourself friends or lovers or partners with or parents of someone who drinks a lot you know how reliable those people are in terms of being there when you need them, showing up when they’re supposed to, remembering things, finishing what they start. You know how they can say devastating things that linger like a rancid fart.

You know how chronic drinkers often talk about not feeling well and blame it on the bacon they had for breakfast instead of the four beers they had the night before. “I think I have a flu or something.” Yeah, right.

As someone who abused the hell out of alcohol for a good swath of my life, I know the delusional realm in which drinkers live. The fuzzy fun-filled world of the buzz seems like good clean fun until you notice that your life has a few too many dysfunctional dramas in it.

As someone who seems to seek out drinkers and enmesh myself with them, I finally realized that despite my aversion to all the God talk at 12 step meetings, I was powerless over alcohol and what a mess it created in my life, and I needed help.

Functioning alcoholics, or, if you prefer, chronic drinkers who don’t seem to be causing any harm, inevitably behave in juvenile ways that hurt themselves and others.

And people like me who play a leading role in their dramas end up being a burden to loved ones who have to hear about those dramas, the same ones over and over and over again. I cry. I talk, talk, talk. I’m a pain in the ass.

I have noticed that the people I know who have fucked up royally in some way are more than likely drinkers. And I’ve often been the one they could come to for a good dose of enabling – even taking them out for a beer while we talked about their big messes and persistent lack of achievement or contentment.

As someone who practices Zen Buddhism, I see the 12-steps as a process of detachment from the ego-centered behavior of enablers like me. We toggle back and forth between wanting to change and control the drinkers and wanting to buy them a round to show how cool we are. We want to be needed, liked. And we often end up hating the drinkers and ourselves for being caught in such a tawdry cycle of self-focused fear and anger.

Yes, there are other evils out there besides alcohol. And yes, there are assholes who aren’t drunks. And yes, a glass of wine, a couple of drinks at a party, a pint of Guinness in a pub  – these are not the sure signs of addiction.

But hello my name is Kate, and I have been in the familiar world of chronic drinkers for too long. It’s a huge waste of time and energy, and whatever was comfortable and entertaining about it has expired like a carton of lumpy milk.