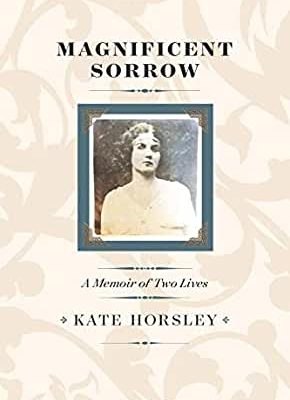 In my book Magnificent Sorrow: A Memoir of Two Lives the main focus is a woman named Suzette Ryerson who survived the Titanic tragedy along with her mother, sister and brother. Her father didn’t. Those who knew the Ryersons knew not to mention the disaster around them. And when Suzette’s husband lived through the trauma of a WWI battle that went horribly wrong and could not cope, she advised him not to talk about it to anyone. She didn’t want herself or her husband to be seen as weak.

“Image is everything,” tennis celebrity Andre Agassi was made to say in an ad. He claims to regret having said that, along with regretting spending stressful years hiding the fact that he was balding until he finally just shaved his head.

There is a huge relief in admitting that ultimately you can’t control other people or what they think of you. There is a huge gain in looking squarely at facts and questioning your desire to believe whatever comforts you or gives you some sense of control.

The Titanic was unsinkable; World War I was the war to end all wars. “You can do it all on line” and “I’m the greatest president ever.” People will buy what’s being sold, until – until the ship sinks, World War II begins, the latest technology isn’t reliable. And those who don’t buy in are often ostracized or worse – ruined somehow for not going along. Until… “Gee, Ed was right. What ever happened to Ed?”

There are just some things that seem obvious despite the loud testimonials, especially to those close to the reality. It was clear to those who sat shivering in the Titanic lifeboats that the unsinkable hype was a delusion. It was obvious to those who saw the massacre of soldiers firsthand on the French Front, where inches of territory were fought over for years, that WWI was a bloody tragedy of errors.

Sometimes people can’t handle the truth until they’re forced to. By then, a lot of hurt can occur.

Now there’s a plethora of hype. We’re in a social media time when there’s a huge emphasis on image. Whereas some realities that were cruelly hidden in Suzette’s time, such as same sex love, are much more out in the open, humans still have a strong urge to spin the facts. Facebook is a steaming example of this. Those of us who know the back story behind some post or photo choke on the response we don’t dare make public. “Really??? Really???? But what about that fact that you….”

My spirit guide is the little kid in “The Emperor’s New Clothes,” the one who yells out the obvious truth: “He’s naked!”

The problem is, I’m not sure I can take what I’m dishing out, because I’m also adept at avoiding certain truths in service of my neuroses, ones I don’t want to reveal here because doing so might mar my carefully crafted image.

Many women hide the truth all the time; as Hamlet said, “God has given you one face and you make yourself another.” Make-up, hair dye, false fingernails …. But everyone knows that your lips aren’t naturally that glossy and that J. Lo has wrinkles. It’s kind of like a game we all agree to play. And what harm does it do to look fifteen years younger than you are?

Meanwhile, the lies sound extremely convincing, including the ones we tell ourselves, and we have to go through years of unwinding the conditioning, years of living a life that isn’t real.

So, I’d tell Suzette and her husband today, “Stay in that little house in the village in the French Alps where George could fix cars and you could be a doctor. Whisper all your secrets to each other. Don’t be lured back by the high society and captains of industry whose delusions sink ships and start wars.”