Diana and I shoplifted a lot in Atlanta, Georgia, in the summer of ’73.  We were bad girls, living in a house of students or quasi-students who did drugs, figured out how to rip off various companies by putting bills in the name of Herbert Marcuse, and slept with each other and with each other’s partners. We considered ourselves on the cutting edge of intellectual hedonism, profound freedom that in truth was unmemorable and stupid.

What I remember most about that summer is the book I was reading at the time: Catch-22 by Joseph Heller.

I was often reading it beside a pool at a nearby motel that Diana and I would sneak into – sneak really isn’t the right term since the manager liked having a couple of hippie chicks in shoplifted bikinis hanging out for the viewing pleasure of himself and his lodgers.

I can still see the shape and feel the texture of Heller’s book in my hand. I lived in it, through the hints that something deeply sad and horrific had happened. At the end you find out what a young soldier’s repeated complaints of being cold are all about. It’s a stunning revelation about war – any war.

Much earlier, in more innocent times, I read Margaret Mitchell’s Gone with the Wind in three days and nights, hardly sleeping. My mother thought I was making myself sick. The movie was also great, but a book is a door through which you enter into the world of the story; you don’t just watch it.

Going forward to the mid-nineties, my son, 14 at the time, was in his room with the light on at 4am. I was afraid of what he was doing – something bad, no doubt, like his mother used to do. But he was reading. In one night he read J.D. Salinger’s Catcher in the Rye. It spoke to him. He also, like Holden Caulfield, was struggling in a world where adults seemed to be full of shit.

My spiritual life, the thing that has sustained me and strengthened me when I could easily have imploded, was started by books, the most memorable being Alan Watt’s The Meaning of Happiness. It pulled me back from the abyss of psycho drama and started a lifetime of zen Buddhist practice that has never let me down.

Man’s Search for Meaning by Victor Frankl still looms as profound proof that in the most horrid of circumstances, integrity can survive. I had already renounced shoplifting, but Frankl’s book challenges one to manifest the beauty of life no matter how victimized or in what sick system one exists.

I worry about a world in which people don’t read books. Living the emotions and pains of characters outside one’s self is what empathy is all about. Information doesn’t develop empathy. Blogs that take 15 minutes to read don’t allow someone to be in the shoes of someone else long enough to walk in them.

A privileged white girl, I had no access to the details of the lives of African Americans except through books like The Autobiography of Malcolm X. Where was I going to understand the life of Chinese peasants other than in The Good Earth by Pearl S. Buck? And John Hersey’s Hiroshima left images in my mind that speak up whenever the issue of nuclear arsenals is raised.

Sometimes the magic of a book took me into a fantastical world, one so poignantly and thoroughly crafted that I cared deeply about something as foreign to my own life as a hobbit.

There are many ways to get out of one’s self-centered focus and care for others. One can do good works. One can care for others through actions and policy making. But good books shape the heart for such work.

There are young people who read. I know there are. Some are my students. They turn me on to books, such as the wonderful sci-fi work Ender’s Game by Orson Scott Card. So the stream hasn’t dried up. But it’s trickling.

The flow of books and reading has thinned in large part because of a profit-based foundation on which all kinds of arts now rest comfortably. I doubt Joyce’s Finnegan’s Wake would be published today. Editors now consult the accounting and marketing departments before taking a risk with a manuscript. Bold marketers could sell whatever they devote themselves to, but they give their limited time to a sure thing.

I wonder what we’re missing, what’s not available to us that could rock our world.

As a writer, it’s my job never to give up, to keep writing about what compels me, not what I think can be easily marketed.  And I also have to be self-critical and sure that my work is worth the time I’m asking readers to give to it. I have to be willing to revise and deepen my writing and accept that no matter how much time I’ve put into a book, it just may not be worthy of publication. As I tell my students, serve your art, not your ego.

As a teacher, it’s my job to inspire students to expand their lives – to live a book. But I have to be realistic. I have to say that reading a book requires a radical slowing down of the typical lifestyle of surfing the net, texting and playing video games. We have become addicted to shallow stimulation and a pace that doesn’t fit the process of reading a novel.

At 58, I’ve been sucked into that fast lane. I can see its toll. I rarely carry a book with me anymore. And I can feel what I’ve lost.

Maybe the only conclusion to this is simply to say thank-you – to so many writers, living and dead, who gave me intense experiences, lasting reference points. And thank you to publishers and libraries whose dedication to books has made a place for readers and writers to abide freely. 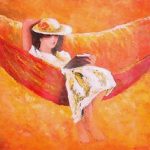