Skip to navigation Skip to content
14
- January
2009
Posted By : kate66
Comment : 1
Finding What You Weren’t Looking For: Where Research Leads the Writer 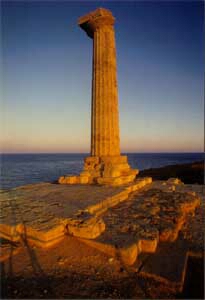 There’s only one column left of Hera’s temple in Crotone, Italy. To get to it, you walk through a park that has a fraction of the olive trees that once grew in the thick forest that covered the area. The forest is gone. The temple is gone, except for this column and other crumbs left behind — the stone foundations of various chambers, serving various spiritual and sexual needs.

In December there can be a cold wind on the coast of Southern Italy. You can stand alone, like the column, on this ancient site, uncomfortably bundled, wondering what happened to Hera, what happened to Crotone where Pythagorus and his cult once contemplated the geometry and music of the cosmos.

Today Crotone has a speck of charm left and a lot of trash, noise, combustion engines and organized crime. African refugees, brought to this particular promised land by corrupt industries,walk to and from barbed wire bound compounds in silent groups — cheap laborers for some fat gatto.

I wanted to go back home, to leave this wrecked place and its sad remnants, or at least go back to the Zen Center in Rome, an unexpected refuge in the most Catholic city in the world. I was getting a few details for my novel about Pythagorus’ cult — the shape and size of the little oil lamps the ancient peoples carried, the way the sky and sea looks from Hera’s temple — but it was scant information compared to the piles of trash leaking into the streets and the constant roaring of a thousand cars looking for one parking space. What was the point of dealing with the nine hour tin can experience of the airplane, the frantic and humorless security lines where people threw items into plastic tubs and then rushed to reorganize, anxious about missing a connecting flight? What was the point of spending oodles of money for a walk through a tiny museum and a shivering pilgrimage to one sad column when my publishing prospects had waned since the low sales numbers of my last novel?

As a writer of historical novels, I felt that I had to stand where my characters stood. And I did — in more ways than one. I understood, as I could never have understood staying at home with my dog and my imagination, the poignant end of one of history’s noble efforts. The impermanence of ideals, philosophies, utopias and even gods, is hard to take. You want to hang on to a romantic idea of something, anything — ancient Greece, modern Italy, yourself as a writer being inspired by beauty instead of being depressed by trash and by the exploitation of once hopeful African immigrants.

This depression followed me back to Rome where I must have been one of the grumpiest adult tourists ever to trek through the maze of the Vatican museum to see the Cistene Chapel. With hundreds of people, I craned my neck to stare up at Michelangelo’s work; the part where God reaches out to Adam was much smaller than I had thought it would be. And everything was so damned ornate and ostentatious, so patriarchal an opposite of that one beautiful remnant of the mother goddess — that single column, hanging on, looking out to a vast blue ocean that, at least on the surface, remained uncluttered, unruined.

A fiction writer seeking the truth is in itself a kind of oxymoron, and I felt like a moron. I liked the sanctuary for cats in an archeological site in the Argentine section of Rome better than the Cistene Chapel. Cats were everywhere — on broken columns, strolling along tumbled stone walls. And I loved the shiny Micky Mouse face balloon that had floated up against the ceiling of the entranceway to the Pantheon and that grinned stupidly down on tourists like today’s manifestation of Zeus.

Truth moves, erodes, morphs, disintegrates, makes a joke of expectation and certainty. Whatever I write will somehow spin around that one column and have a lot of cats and the face of Micky Mouse looming somewhere.

I had no idea that’s what my research would turn up.